The Battle of Paulus Hook

When you hear about the Battle of Paulus Hook, it really doesn’t sound like much of a battle. Twenty-three year old Major Light Horse Harry Lee was supposed to make a daring raid on the British-held fort. However, the British soldiers had already left to do their own raiding, so there weren’t many soldiers around to fight.

The whole battle - 300 men against 40 Hessians and some British officers – doesn’t sound too difficult, but it was a big deal in 1779, when the Patriots were solidly losing.

First was the geography. It’s hard to imagine now, but Paulus Hook west of Washington Street was a marshy swampland, and the fort that sat roughly at the high point near the intersection of Grand and Washington streets south to about Sussex or Morris Street. The fort was on an island at high tide - salt marsh surrounding on three sides and the Hudson river lapping the shore at what is now Hudson Street.

Light Horse Harry Lee initially proposed attacking at midnight. He was coming from New Bridge, which was near what is now Paramus by foot all the way to the fort in Paulus Hook. This would mean a round trip march on a hot rainy August night, with a battle sandwiched in between.

The war wasn't going well and George Washington liked the idea of an attack. He suggested that the troops approach the Bergen Peninsula instead by water from Newark and return the same way. 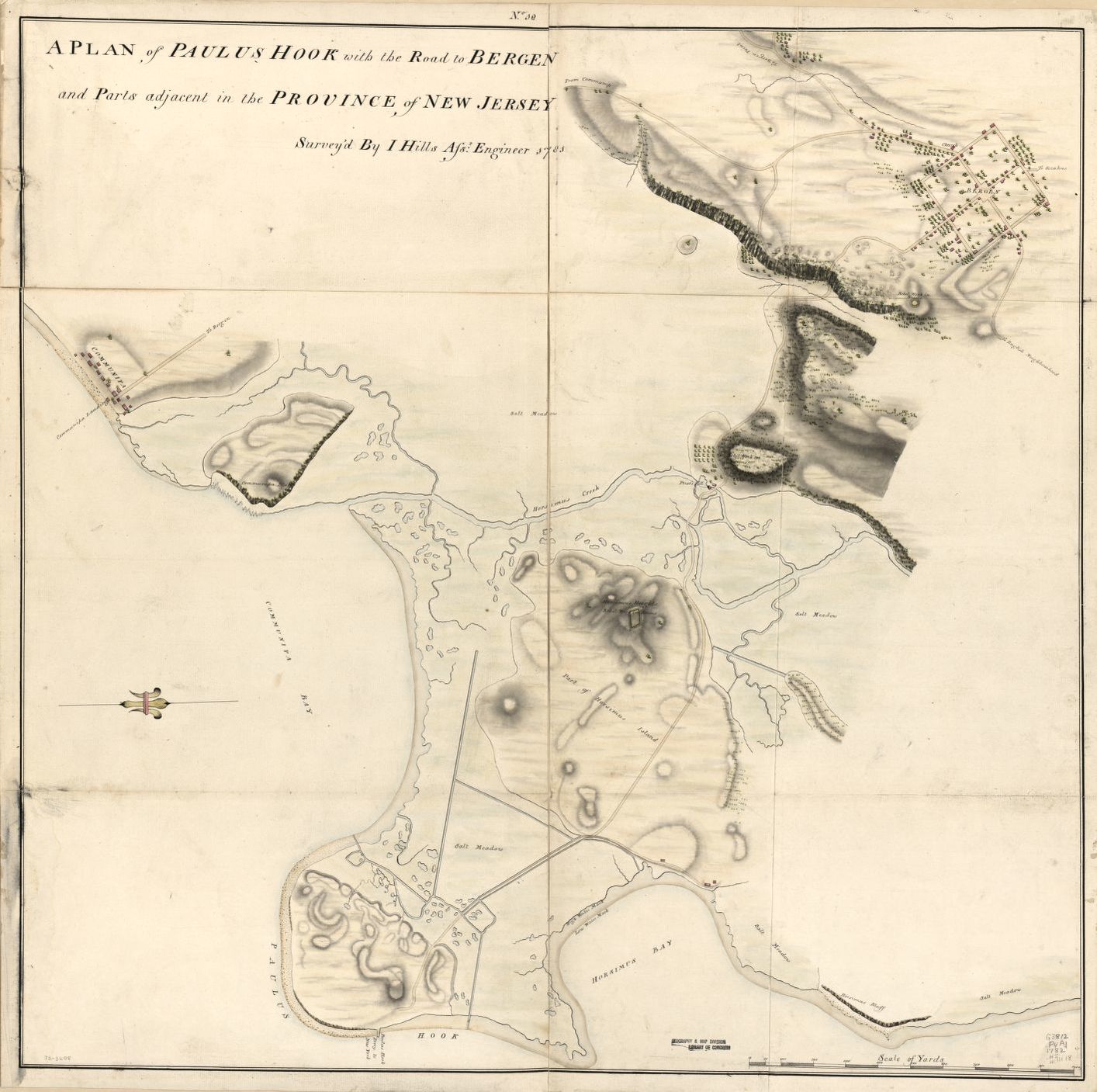 Lee revised his battle plans. They would march to the fort at Paulus Hook and after the fight, retreat to Douw’s Ferry, near St. Paul's Avenue on the West Side of Jersey City, where boats would take them across the Hackensack. From there they would head north, back to New Bridge.

General Washington liked the revised plan so much that he added a second group of 300 troops from Virginia to Lee’s force. He wasn’t going to lose this one.

On the morning of August 18th after considerable disagreement between the Virginian commanders and Lee’s commanders as to who was actually in charge of the operation, the troops departed New Bridge for the attack.

At dusk, as Lee’s forces were headed towards Bergen, the western part of what would become Jersey City, the British Commander Van Buskirk, stationed in Paulus Hook, decided to conduct a raid on Englewood, and he and his men left the fort, marching north on Bergen Road.

Meanwhile Lee, approaching what is now the main entrance to the Lincoln Tunnel, got word of the British troop movement, and sent his forces up the palisade around Hoboken and through the woods where they got lost. After about three hours they found their way again and emerged around the marshes at Harsimus and continued south. The British and Lee's Patriots passed one another in the night.

At the Hackensack River, the boats were waiting to ferry Lee’s troops across the river. Midnight came and went, and just before sunrise the commander of the small armada concluded that the attack had been called off. The boats returned to Newark without Lee's men.

As Lee mustered his troops at Harsimus, he found that approximately 200 of the Virginians had “become separated” from the remaining troops. Lee realized that his initial plan would no longer work and he reorganized the entire attack on the fort.  As the troops waded through the marches, and half swam through creeks and canals, their gunpowder got soaked. When they approached the fort, the British heard them, but assumed that it was Van Buskirk’s and their own troops returning.

Lee’s attack was so fast that the British sentries were unable to send a coded signal to Manhattan with the alert that the fort was under siege. Although the Hessians kept up steady fire, Lee’s forces quickly captured one of the blockhouses with the few officers and men left to watch the fort inside. Since the Patriots' gunpowder was soaking wet, the entire attack was done with bayonets.

Not finding Van Buskirk and his troops at the fort, and knowing that the sun was coming, Lee retreated without setting fire to the buildings, without capturing any supplies, and without even spiking the British guns. The tired and soggy troops and their prisoners headed up what is now Newark Avenue to meet up with the boats – which of course, had left hours before.

Lee’s men had marched 25 or 30 miles since the previous morning, wandered through woods, climbed the rocky slopes around Hoboken, waded through the Harsimus marshes, fought a battle all on no sleep or food. It was now broad daylight, they were in the middle of enemy territory and their muskets had no powder.

Lee sent a dispatch rider off to General Stirling, in command at New Bridge, requesting a force to meet them. He marched back to Bergen Road and headed north to New Bridge.

Near Weehawken Road Lee reorganized the bedraggled group into three parallel lines. Suddenly 50 of the “lost” Virginian troops appeared out of the woods with dry gunpowder that was distributed between everyone.

Just as they arrived in Englewood, a rescue party from New Bridge appeared at the front of the columns. Then they noticed the British forces, advancing at the rear. But Van Buskirk had seen the 300-man rescue party and pulled back. By 1 PM on the 19th of August the troops and their prisoners were back in New Bridge.

For all of its miscalculations and quirks, the battle was a sound victory. Lee’s attacking party suffered two killed and three wounded. The British had 50 killed or wounded, and Lee took 158 prisoners. The encounter served to demonstrate that American soldiers could win an attack against trained British and Hessian troops – and within three-quarters of a mile of British Headquarters in New York. It also showed that no isolated British outpost was safe from capture. The Battle of Paulus Hook raised Patriot fever, and lowered British and Tory morale.

The Americans court-martialed Light Horse Harry Lee for numerous charges mostly related to disputes of command with the Virginians. Washington did his best to back up his young commander, and Lee was ultimately vindicated of all charges. He received a gold medal for leading the battle, one of only nine presented in the entire Revolutionary War. The British court-martialed their local commander, Major Sutherland, for allowing such a disgrace to British arms.

The thirty minutes it took to actually capture the fort also solidified Light Horse Harry’s reputation. The recognition of his military prowess probably helped him win the Governorship of Virginia and later a US Congressional seat.

At President Washington’s funeral in 1799, Lee eulogized Washington with the famous words, “First in war, first in peace, first in the hearts of his countrymen.”

Major Light Horse Harry Lee is probably remembered today more for being the father of the Confederate general, Robert E. Lee. But Light Horse Harry was a pretty good military strategist himself. And of all the exploits of his life, he remained proudest of his raid on the fort at Paulus Hook.

Adapted from an account by Craig Mitchell, the Bergen County Historical Society 1979