Register on bit.ly/DCNAForum21 to watch the Ward E Council Candidate Forum on Wednesday at 8:30 PM! Or if you'd like to watch it in person, go to Grace Church on 2nd and Erie. 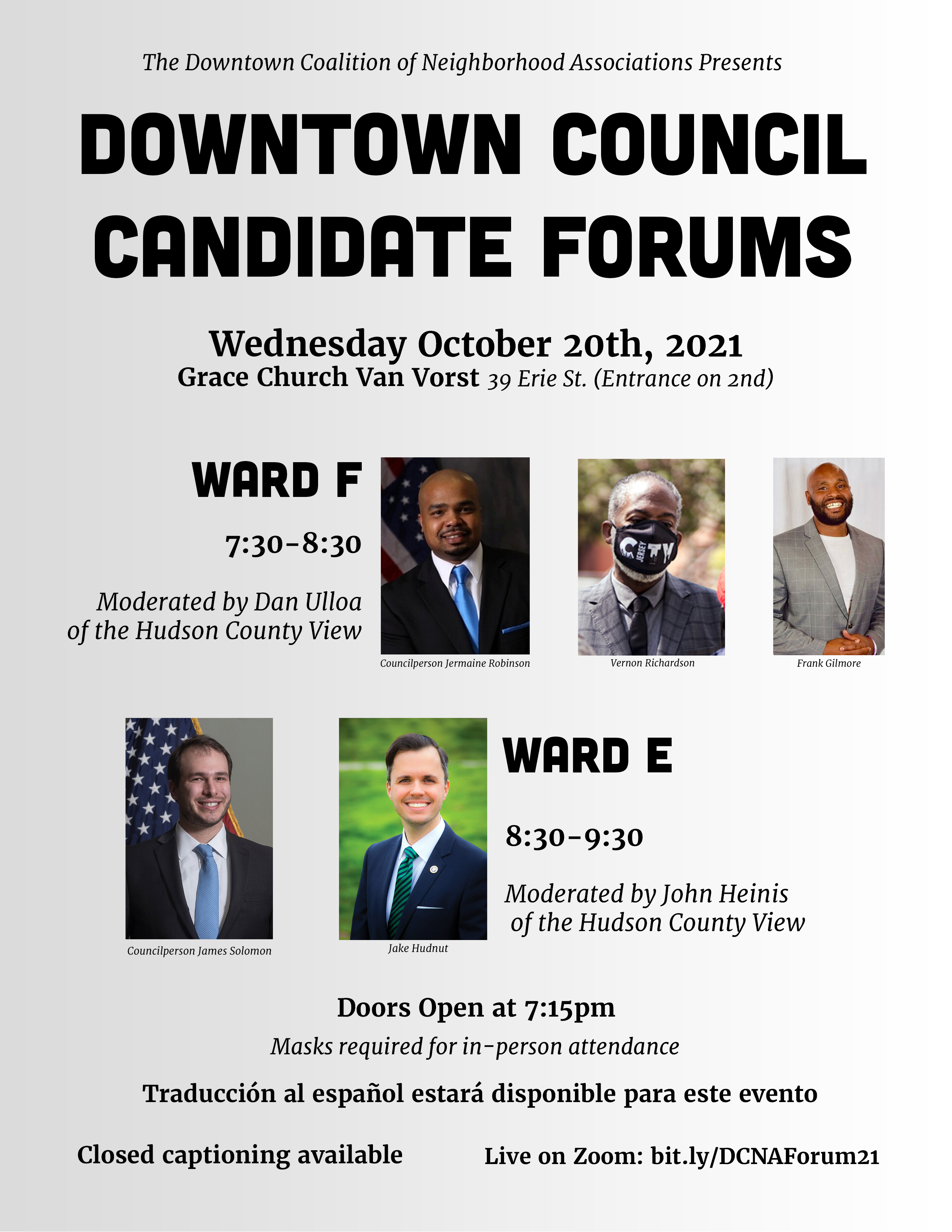 Register and pay at https://hphahalloween.eventbrite.com for the children and pet costume parade. It's $10 per child/pet or $20 for a group of 2 or more.

Check out our Events section for more info! 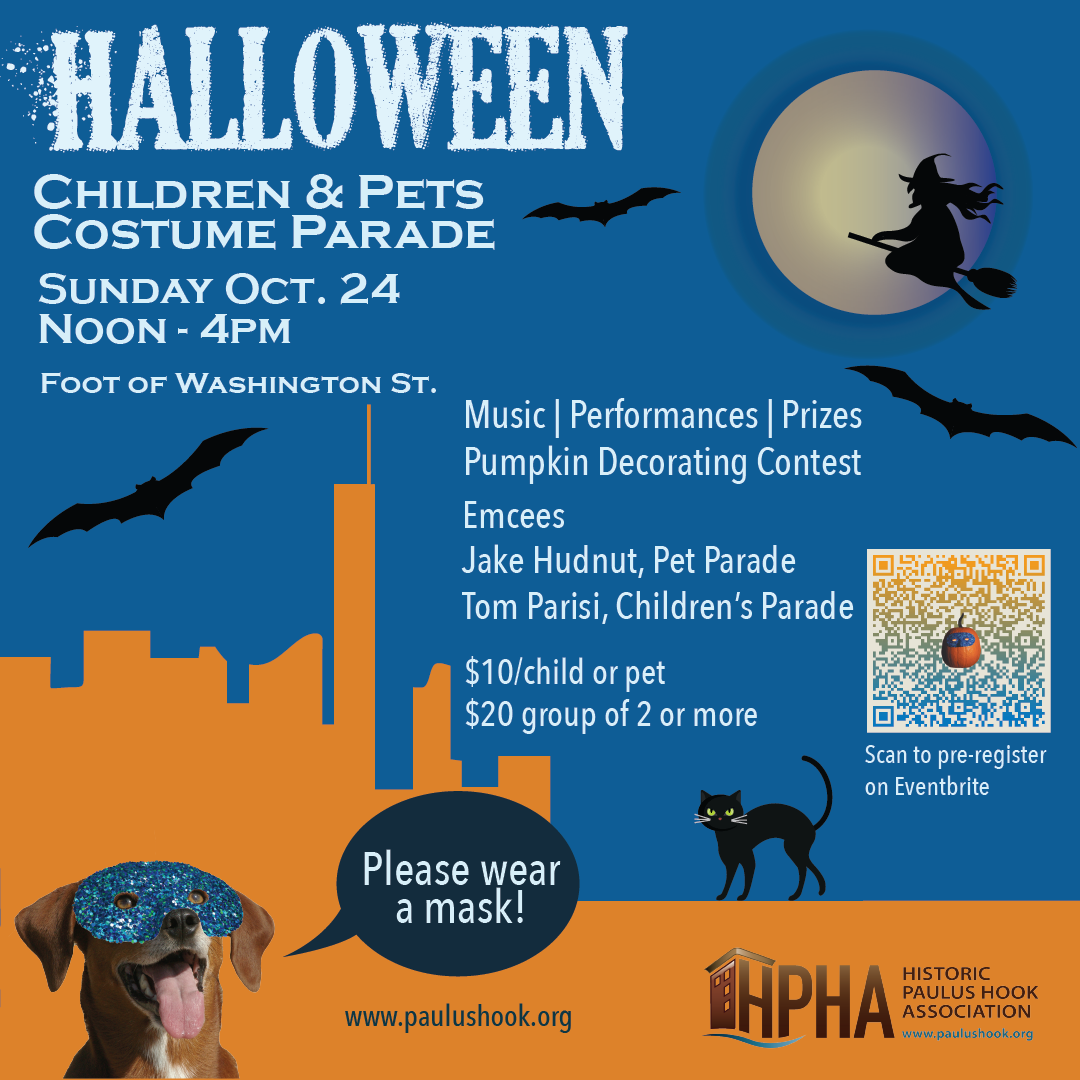 Don't forget to stop by Paulus Hook Farmers Market Saturday from 9 AM-2 PM at the foot of Washington Street by the entrance to Morris Canal (aka Peninsula) Park.

As many know, PS16 is trying to put into place a Memorandum of Agreement (MOU) for exclusive use of the newly built out Fourth Corner of Paulus Hook Park. PS16 is requesting that the city close the playground to all but PS16 students during school days/hours - approximately 8:30AM-4PM Monday through Friday.

The HPHA supports the use of our public park for all children in our neighborhood - and Paulus Hook Park is our only neighborhood playground. The HPHA has worked long and hard for the playground to come to fruition and is confident a compromise between the school and the neighborhood can be made. We want all our children to play safely.

Links to press about this issue:

Neighborhood and School District in Tug of War - NJ.com

Um, no you can't take over a public Jersey City park - letter to the editor from JC Parks Coalition

We sent the following letter to Councilman James Solomon and city officials on 8/30/21, but the issue has not, as of this posting, been resolved.

The Historic Paulus Hook Association (HPHA) would like to thank you for convening interested parties to discuss the request by PS 16 parents and school personnel to have exclusive use of the southwest corner of the neighborhood public park, located at the corner of Grand and Washington streets.  It was illuminating to hear all the various viewpoints.

The HPHA remains opposed to an agreement with the Jersey City Board of Education (BOE) that allows for exclusive use of the public park during school hours by the school.

We do want our children to have areas where they can play, exercise and simply be children. As a neighborhood association we have worked very hard to provide that sort of a space for all our neighborhood children. In 2006 we began to meet with PS16 parents, Board of Education and school administrators and our councilman to discuss the SW corner of Paulus Hook Park. The discussions were about the BOE removing the two rotting trailers that had been in place since the mid 80s, ceasing of use of the corner as parking for select teachers and how PS16’s kids should not be using Sussex Street as a recess area, but rather, have use, along with the rest of the children in the neighborhood, of the so-called Fourth Corner of the park.

In 2010, after over 3 years of regular meetings the Board of Education officially returned the Fourth Corner - which was never theirs - to the public.

In the last 30+ years the HPHA has been able to restore the southwest corner to a public park use, had the foot of Washington Street declared a park although the city doesn’t enforce this ordinance, and seems to encourage vehicles using the declared open space for parking. We also worked closely with the Colgate Commercial Property Owners Association (CCPOA) on the rehabilitation of Colgate Park at the foot of Greene Street, bringing in parents of young children to help with the design.

And now we have arrived at a moment when PS16 has come full circle, demanding that the city create an agreement where only PS16 school children have use of the Fourth Corner of Paulus Hook Park, a public city park during school hours.

So what has changed? Why is exclusive use being demanded now? According to PS16 parents the recent placement of play structures on the corner by the Exchange Place Alliance, programming which everyone wanted, has changed the nature of this playground from a space with nothing on it to one play structures that will bring undesirable outsiders to the playground and endanger their children.

We would ask, how are these children more endangered than the children that play in Van Vorst, Hamilton and other public parks throughout Jersey City?

We came to your meeting to have a conversation. We knew there would be disparate views and we hoped, as our city council representative, you would hear all of the views, and be able to help forge a compromise.

As parents ourselves, who have raised children in Jersey City, we empathize with the desire to protect our children from harm. At the meeting the HPHA suggested that exclusive use be allowed to the school - something that no other school has with any other Jersey City public park - during specified hours, perhaps during morning and afternoon lineups and for 2 predetermined hours during the day. This compromise was flatly reject by Principal Watkins-Williams, who stated that she would rather the children not use the park than not have the park locked all day.

As we also stated in the meeting that we would like the parent association to join the HPHA to lobby the city and the BOE to look for short-term, mid-term and long-term solutions to a problem that is only going to get bigger.  The PS16 building is outdated as a school and doesn’t have the capacity to hold the number of children living in Paulus Hook. Like many old schools in the district, it is not ADA compliant. We need a new school for Paulus Hook. One that doesn't have lead pipes, has handicapped access, sustainable mechanical systems and safe, creative play areas.

We hope, as our councilman, that you will work with all your constituents and help forge dialog and compromise rather than what’s happening now, which is pitting neighborhood groups and individuals against one another.  We strongly encourage you to help the city, the BOE the school administration and the parents of PS16 to think bigger and bolder and more inclusively for the entire neighborhood.