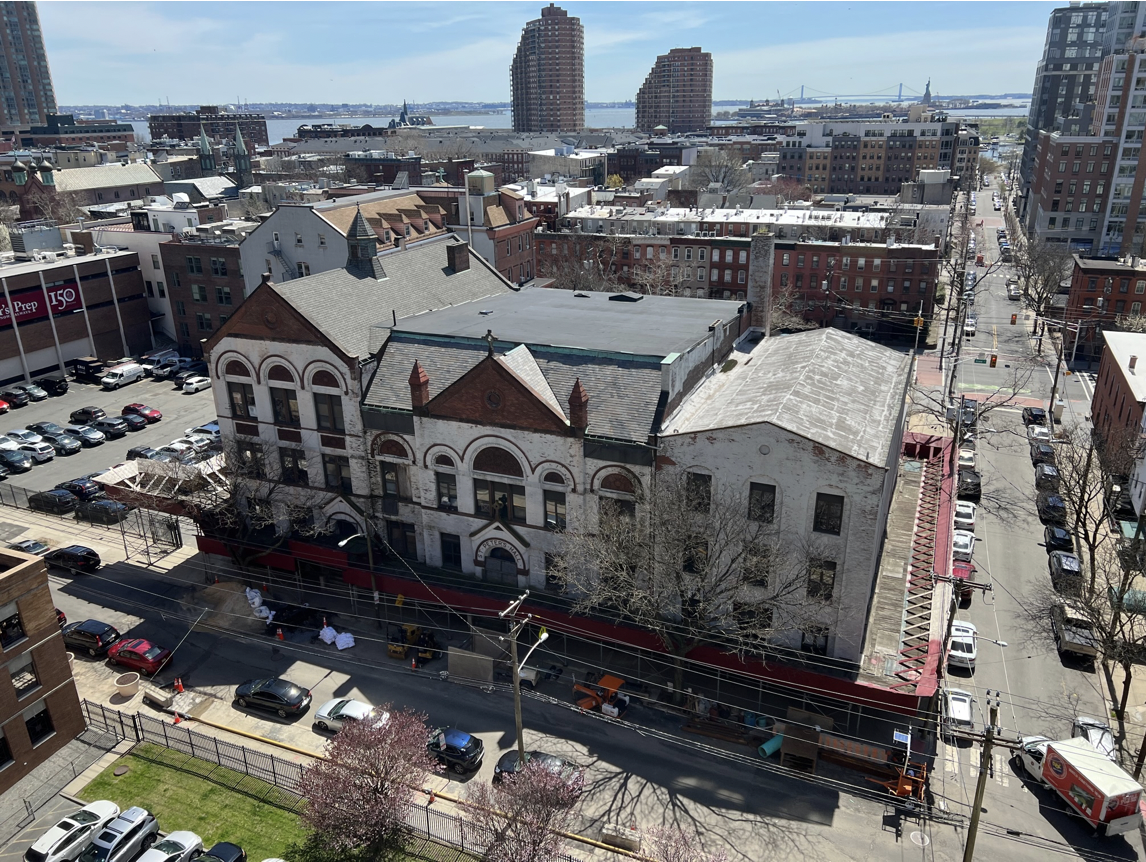 On the corner of York and Van Vorst streets are two buildings currently obscured by sidewalk sheds. But look behind the sheds and you’ll see buildings with a long history. St. Peters Grammar School was built in 1861 and St. Peters Hall, also known as the auditorium building was constructed in 1898. The buildings tell a history of Jersey City's very humble beginnings as a place where immigrants made their homes and worked the docks, warehouses and factories, trudging home covered with dirt, grease or soap residue from the Colgate factory. Backbreaking work. They attended mass on Sundays and their children were taught by the nuns.

In the 1960s and 70s, when waterfront factories started closing, the children of these immigrants left 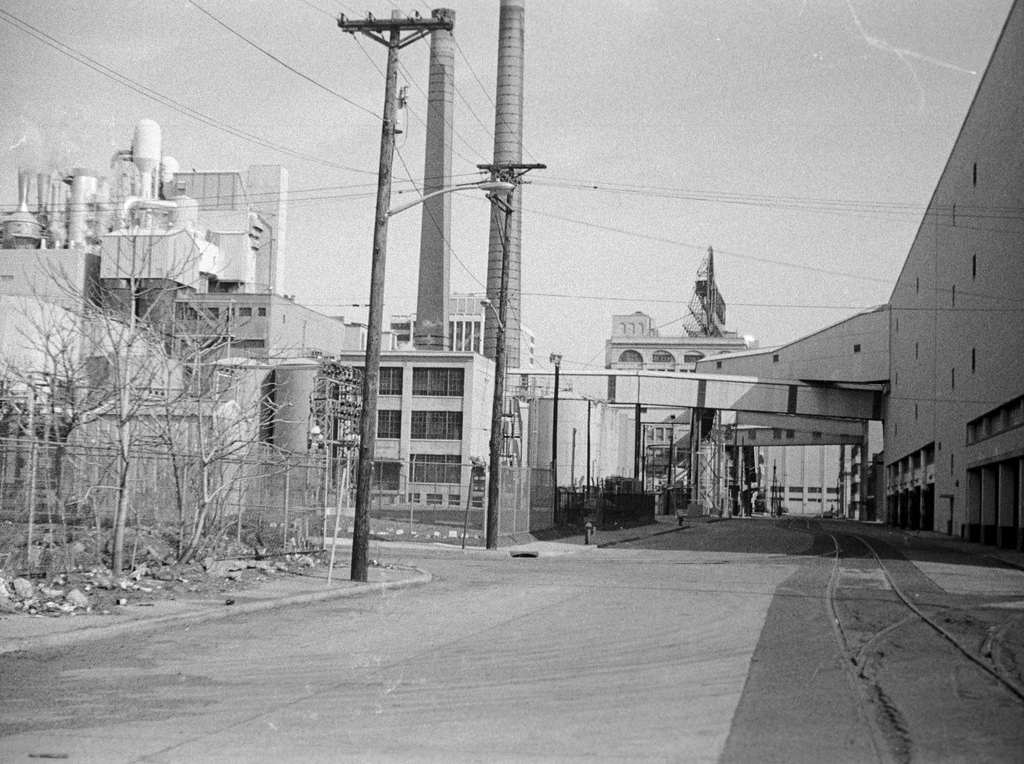 for the dream of the picket fence and grass - a better life in the suburbs from what was one of the grittiest parts of the Jersey City called Gammontown, from the Dutch word gemeen, meaning “abandoned” or “vile,” because the waterfront neighborhood was infested with rats. The last St. Peter’s Church, a mid century modern building erected after the original church was demolished in 1958, was still open through the early part of the 2000s, but finally closed its doors. The demographic of Paulus Hook had changed and there was little need for three churches in the span of three blocks (another Roman Catholic and one Orthodox). The church and the two education buildings on York Street were purchased by St. Peter's Prep in 2004. The mid century modern church was repurposed as a cafeteria and the school on York Street in the older building held its last parochial school class in 2002. A charter school leased the buildings for a few years, but by 2011 St. Peter's Prep had other plans for the historic buildings.

In 2018 St. Peter’s Prep brought the case to demolish the Civil War-era buildings before the Historic Preservation Commission. They were directed to come back with more information to justify their request. In 2019 they did and the hearing resumed. The HPHA, along with a group of concerned Paulus Hook neighbors as well as many residents of the greater Jersey City testified at the hearing and the Historic Preservation Commission voted unanimously against demolition of the historic buildings.

Three years later St. Peter's Prep is now back to appeal the Historic Preservation Commission’s unanimous decision through the Zoning Board of Appeals. Again, the threat to demolish two historic buildings that they have deliberately allowed to deteriorate over the last two decades is very real.

There is a name for this: Demolition by Neglect.

What is Demolition by Neglect? Wikipedia says:

Demolition by neglect refers to the practice of allowing a building to deteriorate to the point that demolition becomes necessary or restoration becomes unreasonable. The practice has been used by property owners as a means of sidestepping historic preservation laws by providing justification for the demolition of historical buildings. In order to prevent demolition by neglect, a number of cities have adopted ordinances requiring property owners to properly maintain historical buildings.

We’ve seen it in other parts of Jersey City, 111 First Street, for example. Sadly, St. Peter’s Prep has a history of using the practice on other historic buildings. Their property at Warren and York streets was neglected, demolished and the property sold. A high-rise luxury residential building took its place.

St. Peter's is arguing the building is unstable after Superstorm Sandy flooded it, which their own engineers disputed on the record in 2019, saying, the buildings could be repaired - if the owner wanted to spend the money. The Historic Preservation Commission unanimously denied demolition then.

Historically, these buildings are significant and have the history to back up the claim. 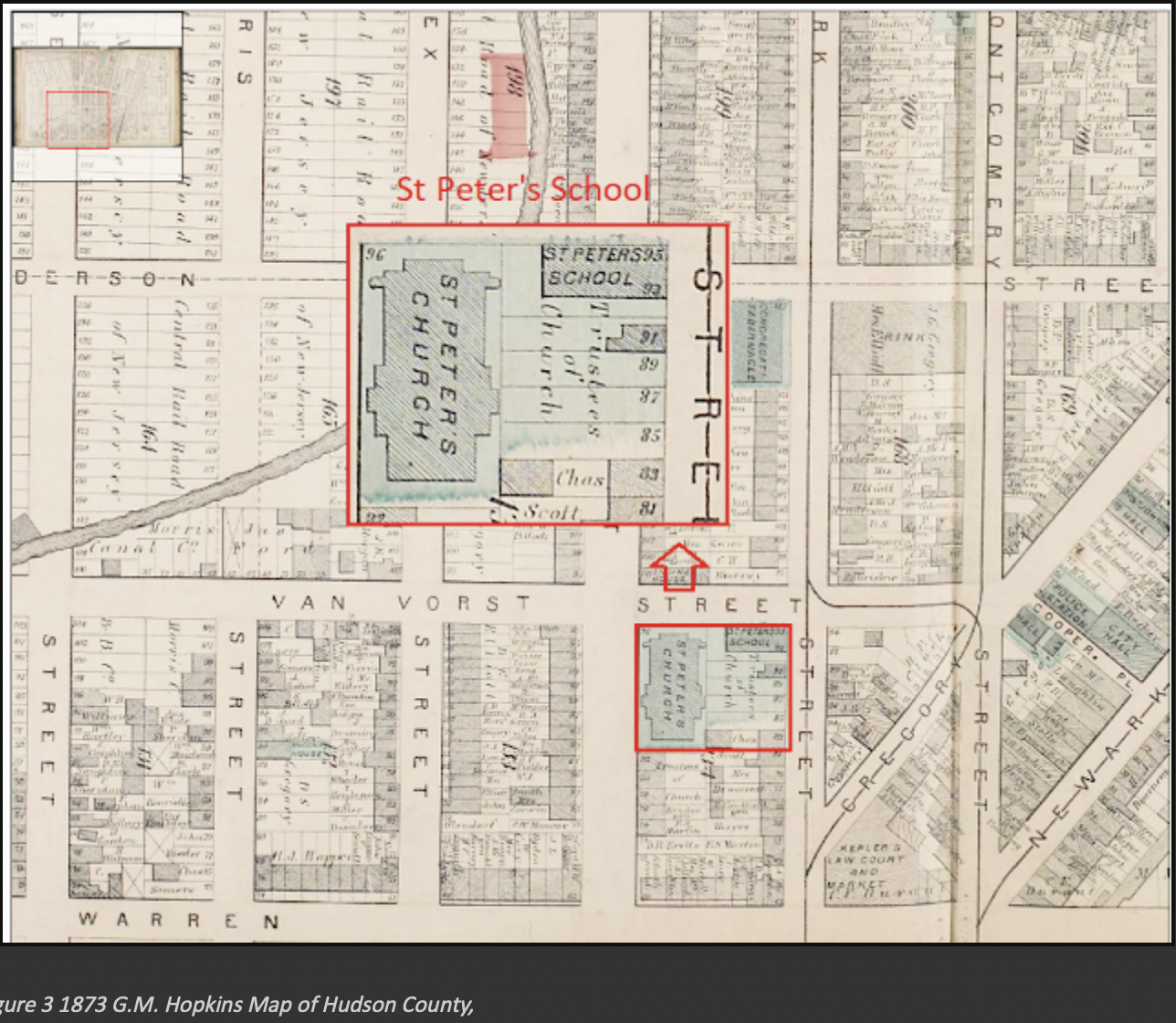 The land for St Peter’s Church was deeded to the Church by the Associates of the Jersey Company – a group of real estate speculators that purchased the land with ferry privileges from Cornelius Van Vorst. Colonel Richard Varick, a lawyer and former New York City mayor was one of the three original stockholders and Alexander Hamilton was treasurer for the Associates. It was Hamilton who put together the original concept for Jersey City’s street grid. Note that back then, Paulus Hook was Jersey City.

Aside from the long history of providing a place for the education of thousands of Jersey City residents, the Hall with its large stage and balcony was a gathering place for lectures, political rallies and other civic activities. In 1910, Woodrow Wilson launched his NJ gubernatorial campaign at St. Peter's Hall.

Why should you take a stand for these buildings?

The HPHA has entertained several proposals for the site of the buildings from SPP over the years including a high rise building and most recently, a parking lot. Does anyone really believe they are going through all this for a parking lot? Note that  at-grade parking lots are not permitted uses in historic districts and are considered bad and retro city planning.

When Sandy damaged our historic homes, we repaired them. We would not have been permitted to demolish them if we'd wanted to. Why should different rules apply to St. Peters? And why should they be rewarded for neglecting their buildings?

What can you do?

1621-1664 - Dutch West India Company sponsors a European settlement on the west bank of the Hudson River.

1804 - After the Revolutionary War, Alexander Hamilton, President Washington's former Treasury Secretary, helps found the Associates of the Jersey Company. Paulus Hook is subdivided into lots for sale and free distribution to churches. Later, St. Peters Parish erects its first of three churches on Van Vorst St. at the NE corner of Grand St.

1861 - St. Peter's Parochial School is erected at 155 York Street. It may be the only non-residential Civil War era building left in downtown Jersey City.

1980 - Paulus Hook Historic District is formed to protect historic buildings within its boundaries from demolition. The St. Peter's buildings are not only protected but are on the National Historic Register. Paulus Hook historic district boundaries are north/south from Montgomery to the canal; east/west from Marin to Greene Street.

2002 - St. Peter's Grammar School (the two buildings by then function as one) ceases operations.

2019 - St. Peter's Prep files with Jersey City Historic Preservation for the right to demolish the two historic buildings on the grounds that Superstorm Sandy has undermined the building's structure. St. Peter's own engineers testify that the building is reparable. HPHA and neighbors launch campaign to preserve buildings. St. Peter's loses bid to demolish with a unanimous HPC vote.

RESOURCES FOR A DEEPER DIVE

The image on the right is from the 1919 Plat Book, Jersey City/Bayonne Page 2. See the original map HERE

Will they Pave History and Put up a Parking Lot? NJ.com